You are here: Home / News / Top methods to learn Spanish online and trends in 2022

Last year we talked about why learning Spanish matters. In 2022 the same trends have accelerated, with millions of English speakers in the US taking in-person and online Spanish classes for work, travel, and school, not to mention mental health and personal enrichment.

In fact, the popularity of platforms such as Google Classroom and Zoom have made online Spanish classes an increasingly attractive option, especially for parents and professionals keen to cut down on commuting times. Instead of driving to school from work or home, you just log in online for your Spanish class from a convenient location.

For many adults, the best way to learn Spanish is by taking communicative online classes. Despite the distances separating one another, participants in online Spanish classes can feel engaged and connected. The instructor uses an interactive student-centered methodology in the best Spanish classes. A lot has changed since 2020, and Spanish teachers have learned from the sudden transition to online formats and adapted. Now that they have a couple years of experience under their belts, the best Spanish instructors create online classes with a comfortable, low-pressure atmosphere that some students may prefer to in-person classes, especially after factoring in the commute.

However, other learners, in contrast, feed off the energy of face-to-face interaction, hands-on materials, kinesthetic activities, and thus prefer Spanish classes on campus. While some students enjoy the organized and accessible formats like Google Classroom, other students would rather work with pen, paper, and white boards.

Both in-person and online Spanish lessons are still an option in 2022. Either way, taking group classes with experienced instructors yields better results than rote learning via phone apps and passive video watching. What you need is active participation, dynamic activities, and guided practice in a class.

Just remember, the point of learning Spanish is to communicate ideas, not avoid mistakes. It’s important to reject perfection!

Why it still matters to learn Spanish online in 2022

Although COVID variants may throw an  occasional wrench into the works, a post-pandemic normal is taking shape.

In terms of the Spanish language, tomorrow’s world will look a lot like today’s. Namely, Spanish will remain the number #2 language in the USA after English.

Consider these facts when weighing whether to take a Spanish course online or in-person:

While adults face challenges learning a new language, don’t get discouraged just because you’re not a kid anymore.

New research from the University of Kansas suggests that adults can learn a new language in ways similar to that of native speakers. This means even older Spanish beginners can make real progress, especially if joining Spanish classes with communicative methodology.

In fact, a new study from the University of Zurich on brain functioning among the elderly further demonstrates what we already know: lifelong learning staves off cognitive decline and strengthens brain functioning.

Learning a new language is never easy, but the best online Spanish course gives you lots of chances to practice speaking. All you need is a computer, Internet connection, and an interest in Spanish.

Cognates help. For instance, liberty and  libertad come from the Latin libertas. Many scientific, literary, and technical terms derive from Latin roots in both Spanish and English. With greater awareness of Latin roots, you can improve your vocabulary in English too!

Sure, you can study Spanish by watching Youtube tutorials, clicking through multiple choice exercises, and squinting at Spanish grammar textbooks. The cup of the Internet overflows with apps, videos, and grammar exercises.

That’s fine and dandy, but most people need social interaction to develop language skills. The best online Spanish classes create a welcoming community to discuss your interests, share your passions, and express a lifetime of experience in a new language.

As a mature learner, you have a lot to say. It’s both fun and beneficial to learn how to say it in a new language.

Learning how to pronounce the Spanish ‘rr’

One of the most distinctive and beautiful aspects of the Spanish language is the rolled “rr” sound, otherwise known as the trill.

This famously musical sound springs to mind when we imagine a Spanish accent.

The first thing to understand is that there are actually two “r” sounds in Spanish.

Different from the trill, the simple or soft r is made by touching the roof of your mouth with the tip of your tongue ONCE. The technical term is alveolar tap, which may sound like a dance move or surgical procedure, but it actually refers to producing the simple r sound. Your tongue quickly taps the bump behind your upper front teeth at the edge of your hard palate.

The alveolar tap sounds somewhat like the “t” sound in the words waiter or otter in American English. It may also sound like a light trill, but it won’t really roll like a true trill.

You use alveolar tap to pronounce the single written letter r in three cases:

The rules of R aren’t always set in stone. Some Spanish speakers trill the final r a word. So, on Valentine’s Day you can say mi amor with an alveolar tap or a trill—and you’ll be right (and romantic) either way.

To pronounce the Spanish trill, you touch the roof of your mouth with the tip of your tongue quickly and REPEATEDLY (not once as with the alveolar tap).

Rather than a single tap, the trill is more like a tap dance. Your tongue “rolls” on your hard palate.

Rule number one (this time set in stone) is that when a word contains two written letter rr’s, you trill to your heart’s content. That means you roll your r’s in barrio (neighborhood) and carril (lane), though not corazón (heart) with only one r.

Note how similar words such as perro (dog) and pero (but) differ. The former has a trill, the latter has a simple r.

The trill may also appear at the beginning of a word but will NEVER be spelled with two letter r’s. That means, you roll your r’s when pronouncing rojo (red), risa (laugh), and rana (frog).

Nobody’s born with the ability to trill. Children may acquire it with enviable ease, but adult Spanish learners often struggle.

Practice is the best medicine. A great time to practice is right after you wake up in the morning, when your mouth muscles are relaxed and have temporarily “forgotten” their normal formation.

Here are two tongue twisters to train your tongue to trill (and do the soft r):

Which version of Spanish should I learn?

Similar to English, Spanish can differ among speakers depending on country, city, or socioeconomic status. There’s no single, monolithic Spanish language. Pronunciation, vocabulary, and even grammar varies among Spanish speakers worldwide, from Mexico City to Madrid.

However, the main differences boil down to two regions: Spanish in Spain or Spanish from Latin America. The differences are not huge. Folks from Spain and Mexico can understand each other, much like a Londoner and Californian are mutually intelligible. 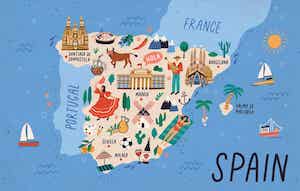 If you’re wondering which Spanish to learn–the Latin American version or the Spanish version–remember that the differences are slight, so it’s not a big deal, especially if you’re starting off.

At least 90% of what you learn pertains to both kinds of Spanish. It doesn’t matter much which you study, especially if you’re learning Spanish for beginners. When choosing Spanish conversation classes, don’t worry about which Spanish to learn.

Differences among accents, vocabulary, or grammar may throw up occasional stumbling blocks, but no major obstacles. The speaking skills you develop in your online Spanish classes will let you communicate in any Spanish-speaking country.

If you have specific travel or work plans in a particular region or country, you may wish to narrow your focus as you move up to the intermediate level.  Sooner or later, you may want to expose yourself to a variety of accents.

As long as you practice the fundamentals in a dynamic online Spanish class and keep your ears open to the different accents, you’ll be prepared to communicate in most situations at home or abroad.

How long does it take to learn Spanish fluently?

Science offers no definitive answers as to how long it takes for an adult to become fluent in Spanish (or any other language.)

If you were to take 12 hours a week of in-person or online Spanish classes, that adds up to one year.

Of course, the greater your daily time commitment, the faster you become fluent. Regardless, achieving fluency requires resources of time and determination.

Fluency, however, may not be necessary for you to reach goals. Learning Spanish for beginners can bring great results if your immediate aim is to start socializing with Spanish-speaking colleagues in their language, understanding the lyrics of favorite Latin artists, or deepening your insights into Latino/a and Hispanic life in the US. You don’t need to be fluent to travel to Spain or Latin America and get a lot out of the experience.

The best online Spanish classes will give you tools to start understanding Spanish-speaking culture and communicating with people in Spanish immediately. In an effective interactive online Spanish class, you’ll learn to do things like order food, meet new neighbors, and read signs in Spanish.

The journey of a thousand miles begins with a few steps. The best online Spanish classes use a communicative approach to get you walking and talking.

Learning Spanish for beginners is a highly personalized and social process. The best online Spanish classes can get you understanding and speaking Spanish in a simple but meaningful way after just a few hours a week.

Sending a big THANK YOU to all of the students, co

Giving Voice 2022 is just getting started! Our a

Congrats to @alisaamador on winning the 2022 @nprm

What does resILIence mean to you? Giving Voice 20

Today @hiroiwatsuki came to ILI to film a video ab